With WiFi now becoming a way of life that is increasingly becoming more difficult to avoid, it is good to know the dangers associated with this technology, and how you can protect yourself and your loved ones from these hazards.

The Global Healing Center has identified the following health hazards associated with WiFi.

1. WiFi Can Cause Insomnia

If you are struggling to get to sleep, or suffer from disturbed sleep during the night, chances are your WiFi may be to blame.

People who use WiFi before going to bed frequently complain that they suffer from insomnia. Studies have shown that exposure to EMF radiation from WiFi networks can significantly affect sleep patterns, and long-term exposure could lead to further problems associated with lack of sleep, including hypertension and depression.

Studies have shown that radiation emitted from WiFi networks, including cell phones, can negatively affect the developing fetus in the mother’s womb, and can also impair development in young children.

Safety standards typically do not take into account the impact that EMF radiation has on a developing fetus in the womb.

Fetal EMF exposure has been associated with childhood asthma and childhood obesity — both of which can compromise the health of a child. There are many studies linking EMF radiation in children to behavioral and neurological problems, that deal with focus (ADHD), memory, and cognitive impairment.

A study by Swedish researchers concluded that children who began using mobile phones regularly before age 20 had more than a fourfold increased brain tumor risk.

Their results were alarming — while the plants in the WiFi-free room flourished, the plants that were exposed to radiation emitted by the routers simply didn’t grow at all.

Scientific research has shown that exposure to EMF radiation can reduce brain activity.

Exposure to EMFs emitted from WiFi can cause DNA defragmentation in sperm cells and slow sperm motility, while heat emitted from laptops can even kill sperm cells outright, all of which negatively affect male fertility.

Studies conducted on female animals show that EMF radiation can also prevent eggs from being implanted in the womb or can cause abnormal pregnancies. EMF exposure during pregnancy has also been linked to a three times higher risk of miscarriage.

A study that exposed female mice to Extremely Low frequency, or ELF, magnetic fields throughout their pregnancy, showed the exposed mice had less offspring, spontaneous abortions and fetal deformities. Slowed development was also observed in the offspring that did survive.

8. WiFi Can Cause Cancer

EMF radiation from WiFi and cell phones has been linked to cancer.

While people exposed to high levels of EMFs may have a short latency period for cancer development, for most of us that are exposed to EMFs at lower doses, this risk is still high, but may only manifest after years of constant long-term exposure.

Exposure to EMFs emitted by WiFi can raise the heart rate or cause an erratic heart rate in sensitive individuals, which of course can be fatal.

10. You Can Protect Yourself from WiFi

The good news is that it is not all doom and gloom — you can take steps to reduce your exposure to EMF radiation from WiFi or to protect yourself from it. For example, consider using an EMF radiation shield, to help cut down your exposure significantly.

Watch Below to Learn More About the Risks of WiFi 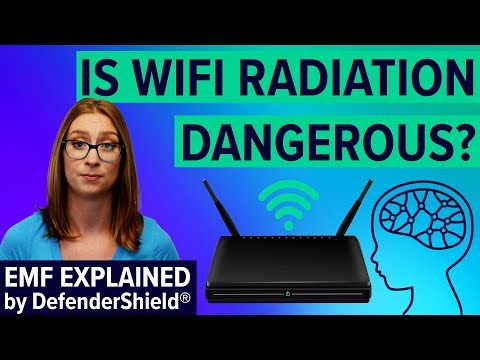