There is a common misconception that if something were truly harmful, the government would take measures to protect us against it.

In an ideal world, where governments are omnipotent and efficient, scientists generate data and legislators enact laws to protect our health and safety.

One of the most notable examples of this in the U.S. may be the current cell phone Electromagnetic Field (EMF) radiation safety standards issued in 1996 by the Federal Communications Commission (FCC).

The current FCC rules describe safety limits in terms of Specific Absorption Rate (SAR), a value that corresponds to the relative amount of radio frequency (RF) EMF radiation, a function of thermal heat, absorbed in the head of a cell phone user.

Many experts believe that SAR is an inadequate standard, because it only limits the short-term thermal effects of RF radiation, despite the large amount of pre-existing data of the adverse biological impacts on the body that are present despite any thermal damage.

Data had already repeatedly concluded that RF radiation causes significant damage to our cells over time, in non-thermal ways.

If you look at the past several decades, research across multiple governmental agencies has warned about the biological impact of RF radiation, the identical kind of radiation emitted by cell phones. Since 2013, the FCC has acknowledged a need for revised guidance on the safety of RF radiation, however the standards remain unchanged at this time. With the release of 5G cellular networks, many government workers challenged these standards, and voiced the need for them to be updated. 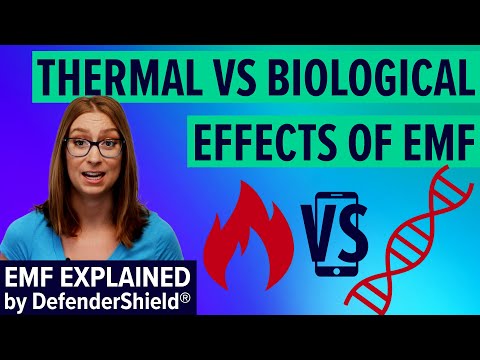 Specific Absorption Rate (SAR)
A value that corresponds to amount of RF radiation absorbed in the head of a wireless headset user.
Unit
1.6 watts per kilogram (1.6 W/kg)

What Did Government Research Find?

It compiled over 2,300 references to the biological responses witnessed due to RF and microwave radiation exposure. The extensive list included: effects to the central, autonomic and peripheral nervous systems; psychological, blood, vascular, metabolic, and gastro-intestinal disorders; genetic, chromosomal, enzyme, physiologic function, biochemical, behavioral, endocrine gland and histological changes; heating of organs and alterations in the bio currents of the cerebral cortex.

A decade later, NASA published the detailed report “Electromagnetic Field Interactions with the Human Body: Observed Effects and Theories” detailing both the adverse and benign effects of EMFs on living organisms.

In 1988, the US Air Force issued a report called “Radio Frequency/Microwave Radiation Biological Effects and Safety Standards: A Review” which described the known biological impact of RF radiation on human tissue.

The report stated, “Exposure to RF/MW radiation is known to have a biological effect on animals and humans. Damage to major organs, disruption of important biological processes, and the potential risk of cancer represent the dangers of RF/MW radiation to living organisms.”

It also warned of mutagenic and cardiovascular effects as well as negative effects on chromosomes.

According to the paper, “Nonthermal responses can be less noticeable and are often more difficult to explain tan thermal effects. These responses are related to disturbances in the tissue not caused by heating. Electromagnetic fields can interact with the bioelectrical functions of the irradiated human tissue. Research conducted in the Soviet Union and Eastern Europe suggest that the human body may be more sensitive to the nonthermal effects of RF/MW radiation.”

This is just a sample of government reports documenting the negative health effects of RF radiation published before the 1996 standards were created.

These findings match closely to those of universities, non-profits and independent researchers. An even more significant amount of additional evidence has been found in the twenty years since. To ignore this research was perhaps careless and short-sighted, as the use of mobile electronic devices, particularly cell phones, has exploded in the last two decades.

It is clear that many governmental bodies are aware that RF radiation, including that from cell phones, can cause significant and irreparable harm.

With all this correlated data, you would think that new standards would be enacted that would establish a level of protection. Yet those who make the standards have not taken appropriate action despite the data.

Why? Maybe one branch of the government is not talking to the other. Maybe the FCC and other standards bodies are influenced by special interest groups. We don’t know the answer for sure. Whatever the case may be, research going back decades showed there was an issue. It is now our responsibility to insist that appropriate standards be put in place, and to minimize the risks of RF radiation as mobile device use grows.

Popular
Past Articles
Blog Categories
10% Off ALL Apparel and Blankets!
HALLOWEEN APPAREL SALE