But how accurate are these ads, with some claiming “Nationwide 5G Coverage?” What exactly is 5G, and what does it mean for the future of technology, as well as the health of the planet?

What is 5G Mobile?

5G stands for “fifth-generation.” Roughly every 10 years the Next Generation Mobile Networks Alliance releases a new set of standards for wireless communication.

Most Americans are already accustomed to 4G’s speedy capabilities, as 4G-LTE networks support more than 60 percent of all wireless connections.

So how is 5G superior to 4G? The main difference is speed.

With data rate transfers increased from 10- to 100-fold we can expect responsiveness to the point where the wait time between clicking a link and the page loading will be only a millisecond.

5G’s other selling point is its ability to support more connections, bringing other objects beyond phones and computers into the wireless fold—i.e., the Internet of Things, or IoT.

Not confined to hardline fiber optic cable connections, 5G will enable us to rapidly communicate wirelessly with remote objects, usually through apps.

The ‘Internet of Things’, or IoT, will be diverse in scope and scale, accelerating bulk conductivity that will facilitate everything from e-health to smart farming and warehousing, to power plant management and enhanced communication, entertainment, and gaming platforms. Entire cities will be transformed.

Worldwide it is estimated that by 2020, 31 billion objects will be a part of the IoT and by 2025 that number will exceed 75 billion. The goal in creating this matrix network of “smart” objects is greater efficiencies, greater convenience—and greater control.

To the average consumer this probably sounds exciting—but more and more discussions are being raised about 5G’s potential health effects. What are the Electromagnetic Frequency (EMF) radiation emissions at this level, and are they safe to deploy all around the world?

The frightening fact is that few short or long-term biological tests have been conducted on the human health effects of 5G radiation emissions. Dr. Joel M. Moskowitz has compiled more than 30,000 research publications on the effects of non-ionizing EMF radiation, but has only found 41 that talk about the health effects of 5G. Considering what we already know about 4G and WiFi this is a major oversight.

The big push for 5G networks to “go live” highlights a disregard for healthy oversight and caution. What we do know is that the human race has never previously been in such routine contact with man-made microwave sources that affect both the environment and human biology.

Given the long latency period (time between exposure and cause and diagnosis) we’re collectively acting as unwitting guinea pigs in a long-term health experiment.

What we do know is that numerous scientific publications have shown that EMFs pose health risks that include increased free radicals, cellular stress, DNA strand breaks, structural and functional changes of the reproductive system, learning and memory deficits, and neurological disorders. The effects range from a decreased sense of general well-being to brain tumors.

A growing segment of the population reports adverse physical symptoms when exposed to EMF radiation. This condition is called Electromagnetic Hypersensitivity Syndrome (EHS).

Typical symptoms include headaches, fatigue, eye problems, dizziness, sleep issues, stress, skin issues, gastrointestinal complications, and muscle aches or pains. The condition is poorly understood and often misdiagnosed, mostly because many of the common symptoms mimic other conditions and are hard to pinpoint.

Typically, each wireless generation has occupied a higher frequency band than its predecessor, and 5G will require its own frequency bands as the current 4G networks prove insufficient. 4G and all those before it fell within frequencies between 800 megahertz and 2.5 gigahertz. 5G will utilize previously disallowed “millimeter waves” with frequencies ranging from 10 to 100 gigahertz: with the possibility of going up to 300 gigahertz. At roughly one third the frequency of X-rays. This is uncharted territory to put it mildly.

Millimeter waves have another major downside. They don’t travel as far as lower frequency waves and are unable to pass through buildings. These frequencies are absorbed by trees, the earth’s atmosphere, and the uppermost layers of human skin. To circumvent this drawback, telecoms will need to install a sweeping number of small cells, which are essentially short-range cellular antennas. There will be different types of small cells, all with different broadcast ranges. The shortest range type, femtocells, will reach less than 10 meters, and the longest range type, microcells, will broadcast to roughly 2 kilometers.

Due to their relatively limited coverage area these cells will need to be installed at a density of approximately one per every 10 to 12 households, making EMF radiation nearly impossible to avoid.

Even though it can’t reach as far into our bodies as the lower radio frequency waves, it can still reach one of our most important organs, our skin, and damage cells that can affect important biological processes, some that we might not even be aware of yet! Dr. Martin Pall, who argues that the faster pulse rate of 5G frequencies will be more biologically active in the body, predicts increases in blindness, hearing loss, male infertility, skin cancers, thyroid issues, and nervous system dysfunction.

Ready or Not, 5G is Here

Whether we want it or not, 5G is fast approaching. To quote Tom Wheeler, the former FCC chair, “The 5G revolution will touch all corners of this country.” Ajit Pai, the current FCC chair, said it similarly, “If the United States is to remain the world leader in wireless technologies we can’t play it safe … the demand for mobile broadband is insatiable.”

With nothing standing between us and the widespread implementation of this powerful technology, we are guaranteed that 5G’s ubiquitous hyperconnectivity capacities will be touted as a substantive life improvement.

What we also know is that the technology will be touted without mentioning anything about the short-, medium-, or long-term health risks—something akin to the tobacco industry’s silence of yesteryear and a cautionary tale for future generations.

For updates on 5G deployment, go to our 5G guide.

Watch Below to Learn More About 5G 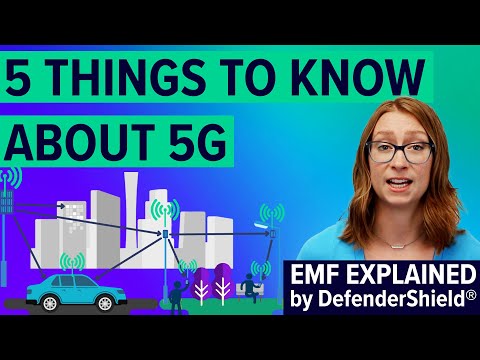 Popular
Past Articles
Blog Categories
10% OFF & 50% OFF SHIPPING!
HOLIDAY SALE