You may not have heard, but according to new research, we are currently witnessing sharp declines in male fertility worldwide. Infertility affects about 1 in 20 adults.

In some first-world countries, such as the US and Dubai, fertility rates have dropped 30% or more since 1980.

In first world countries around the globe, sperm counts have dropped by 50% since 1973!

Researchers debate the different causes for increasing infertility rates. From an increasingly toxic earth to the rise in use of products containing hormone-disrupting chemicals (such as BPA), or the pervasive use of pesticides, which are so disrupting to hormones they turn male frogs female.

Whatever the reason for this global decrease, if you are looking to have children, you might want to re-think putting your laptop on your lap.

While it seems like the name laptop implies you should, in fact, be using it on your lap. But new research is showing that we should be trying to distance ourselves from this technology.

This is due to the Electromagnetic Fields, or EMFs, that are being emitted by all electronic devices, including laptops. This is a low-energy form of radiation that can interfere with and damage cells and processes in your body after extended exposure, leading to adverse health effects, one of them being male fertility.

In recent studies, EMFs have been proven to impact male sperm production and quality, as well as the health of the unborn fetus in females, with other negative impacts upon fertility overall.

Actually, researchers are beginning to wonder if EMF exposure may be primary culprit behind rising male infertility worldwide.

Very simply put, EMFs are a form of energy waves that are emitted by electronic products, wired or wireless. EMFs radiate out of all our electronics, whether it’s a digital alarm clock plugged into a wall, a microwave oven, or a laptop computer connected to WiFi.

Extremely Low Frequency (ELF) radiation is generated by every electronic device which is “turned on.”

Why Do EMFs Impact Human Health?

What researchers are working hard to determine today, however, is how severe the cumulative effect of EMFs can affect our health.

EMFresearch.com lists over 300 studies linking EMF radiation emissions to fertility issues. EMFs have been found to impact both male and female fertility and to affect the unborn fetus in women numerous ways, including fragmenting DNA.

Males, however, are especially vulnerable to EMF radiation exposure. This is because while the female sex organs are buried deep within thick tissues, the male reproductive organs sit relatively close to the surface of the body. Mice studies indicate internal damage to organelles within the sperm cell from radiation exposure. In humans, research has confirmed that the duration of exposure correlates with defects in sperm count, motility, viability, and normal morphology.

The following are some recent studies showing how EMFs impact fertility as well as other serious health effects:

In a 2013 study of the effects of cell phone waves upon male rats, researchers found that cell phones cause oxidative stress in the body which can lead to numerous deadly diseases, and found that exposure to EMFs should be decreased as much as possible, concluding that:

“Cell phone waves may, in addition to affecting sperm parameters, cause oxidative stress in the body and consequently create various diseases. . . It is recommended that more attention be paid to cell phone waves as a source of oxidative stress and exposure to these waves be decreased as much as possible. It is also suggested that individuals who spend more time on cell phones be monitored periodically in terms of reproductive system health and it is recommended that they consume a diet full of antioxidants in order to minimize the adverse effects of these waves.”

In a Reuters news article from November 2011, it stated a study revealed that radiation from cell phones creates feeble sperm in the lab. A urologist noted that a laptop balanced on his knees could crank up scrotum temperatures to unsafe levels.

In a separate South Korean journal, a review of recent research on sperm exposed to electromagnetic fields (EMF) was conducted. Over seventy publications indicated that traits associated with reproductive health were reported to be altered by EMF.

Experts have evaluated the original researchers’ work to offer their opinions, noting the increasing public concern over increased exposure to electronic devices in modern day.

What We Can Do

Despite the controversy, laptop and WiFi exposure is considered by many as a public health issue.

Because of the growing body of research all pointing in the same direction; it is considered advisable to avoid direct exposure to laptop radiation if you are concerned about your fertility.

With EMF exposure, the key is in limiting the strength and length of time we are exposed to EMFs.

The best ways to protect yourself from the negative impacts of EMFs are to:

EMFs aren’t going anywhere. In fact, it’s only going to become a more pervasive threat as the internet gets faster and more alluring with the coming upgrade to 5G technology, which promises to boost internet speeds by 50 to 100 percent.

We need to begin to think seriously about how to find safe ways to use all of our electronics.

As time goes on, we predict, we will only see more and more conclusive studies emerge about the effects of devices such as headphones, laptops, cellphones, and WiFi upon human health.

Watch Below for More About the Health Effects of EMF Radiation: 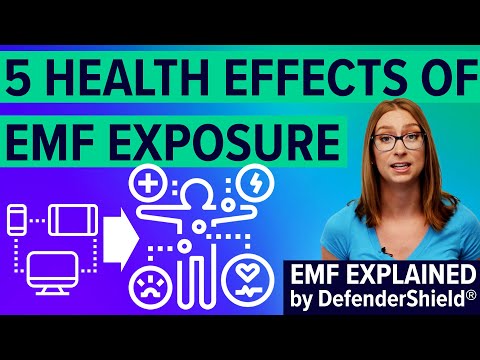